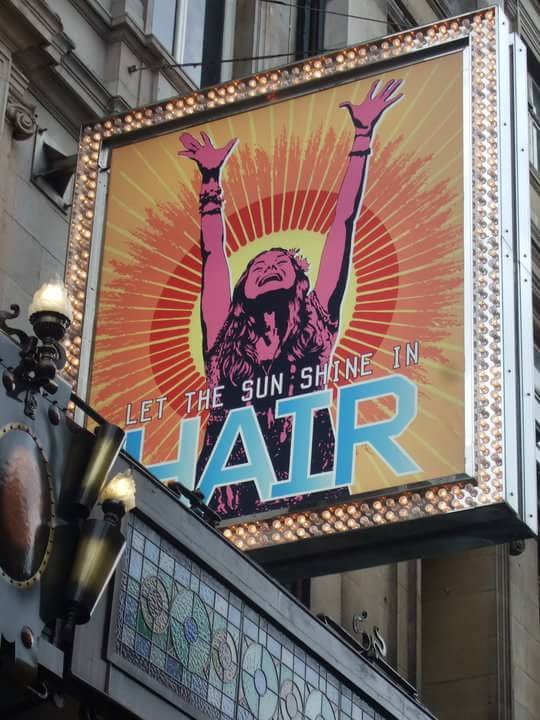 I sat my son down to announce that I was leaving to go buy a trombone so that I could join a steel drum band. He pulled his gaming headset off and put his PS4 control down, and sighed. “Mom, why are doing this?”

Sometimes my son makes me feel like I am the 14 year old and he is the adult.

“What is wrong with my joining a steel drum band?” I said. “What do you want me to do, sit around here and watch Netflix?” “Yes,” he said while readjusting his gaming gear and turning his attention back to the screen.

I think sometimes he just likes me to be home… and it doesn’t matter if he is there or not. Once when he was staying at his dad’s, they stopped by unannounced to pick up a forgotten item. Surprise, surprise… I wasn’t there. When I got his, not his father’s, irate phone call, I said rather exasperatedly that I was not the fixed point in the Universe.

At least not anymore.

Understandably, for many years, I was. Cooking and baking and basically being at home looking after my family when I was not tripping on the corporate ladder. Who has time for outside interests when you are holding down a full time job and taking care of your family? (Well, French women in general, but that will be a blog post for another time.)

When the day came when I did find myself alone for the first time in years, I remembering sitting back on the couch trying to remember what “I” liked. Not the collective “we” but “I.” What books? Movies? And what did “I” like to do? Frightening how quickly one can forget.

To complicate matters, my language setting up to that point was in French. I watched French TV, listened to French radio, and I was working for one of the largest French companies where I worked mainly in, you guessed it, French. Looking back, I really only spoke English when conversing with my son.

Some time later I flew to London to stay with my host sister and I remembering the unbearable lightness of my situation. No diaper bag, toys, snacks…no one to take care of or look after except myself.

It was like I had stepped into a parallel universe, what my life would have been like if.

I remember taking a random double decker bus and rode it until it took my fancy to get off. I laid in the grass of Kensington Gardens just watching the clouds, and dreaming. I went to the theater, saw Shakespeare and Hair, and found myself in the end dancing on a West End stage, imploring until I was hoarse to let the light shine in.

And so my new life began. It is not the life I had asked for or even imagined but it’s the one I’ve got. Soccer coach, to surf lessons, to even playing trombone in a steel drum band.

So why am I doing all this?

Because why the hell not. 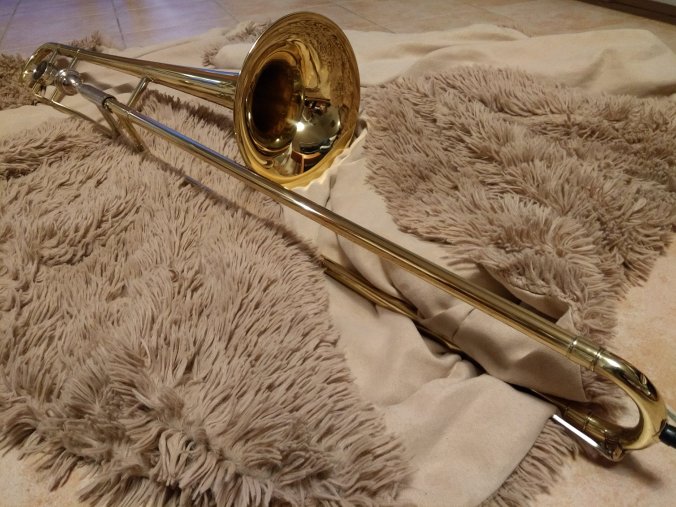 Before leaving the house, I sent a friend the address and phone number of my contact “just in case…”

“In case what,” she replied, “he would be the trombone murderer?”

That would be my demise. Lured to a house by an announce on “Le Bon Coin,” the French equivalent of Craigslist, and be killed by a guy who has a thing for girls with a firm embouchure. Maybe that would be my saving grace… sagging lips.

When I knocked on the door, a guy in his late 20’s opened it and he was surprised that I was alone. “That’s it,” I thought, “now he’s got me.” But it turns out he was expecting my son to there too. I figured that one out when I deftly put the horn together and put it on my shoulder to test the slide. “It’s for you?” He asked incredulously. Yes, yes. Me.

I handed it back to him so he could play a few notes. The sound was good… enough. It is a Stagg, more of a practice horn than anything else, but over the din of the banjo and steel drums, would anyone even notice?

That is when he asked if I wanted to give it a try. I guess my deft handling of the horn made him believe I could really play. Well, how hard can it be? It’s like riding a bicycle, right? After I played a few notes, he cleared his throat. “Ahm, so you are going to take a few lessons?” I didn’t even dare tell him that nah, I was good to go.

After negotiating the price, I picked up the horn case and walked back to my car. The weirdest thing was, it all felt so familiar: the weight of the horn, hitting the positions of the different notes on the slide, even carrying that damn case…it just felt right. 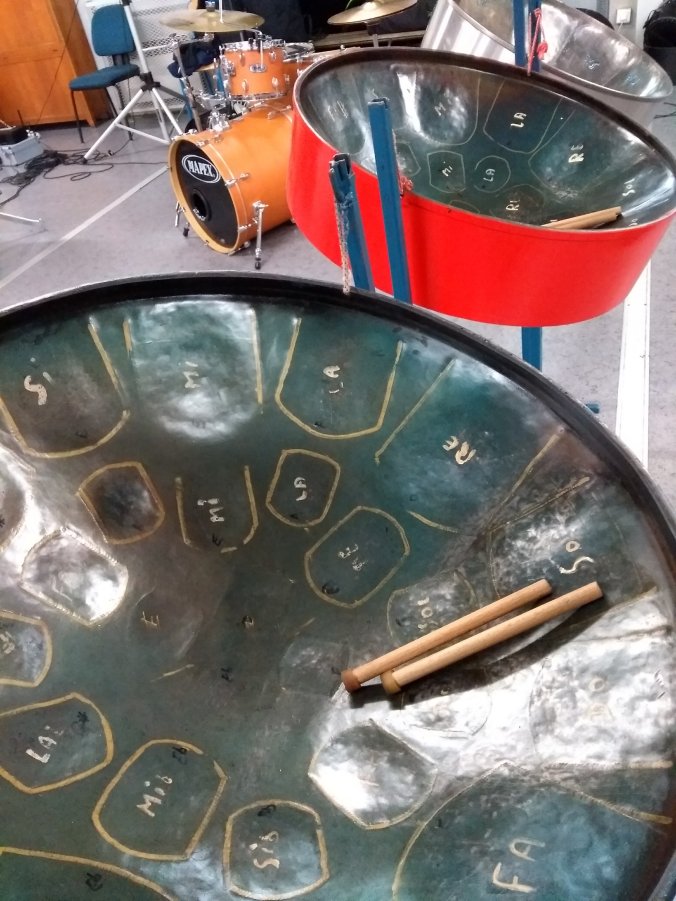 I walked nervously into a French elementary school with a six pack of beer.

Five people were already there and the eight others that followed me in were all packing flasks, bottles… and musical instruments.

Seems I let a well kept secret slip on a business trip that in a former life I played the trombone. A colleague in my multinational corporation leaned across the boardroom table and immediately propositioned me… to join her band.

Now you have to realize that almost a month to the day I graduated high school l left Ohio, and my trombone, behind. Yup, Europe and sophistication awaited. And my future did not include buckeyes or brass instruments.

Almost 25 years had passed living a sophisticated life overseas and now like an embarrassing childhood nickname, that inelegant part of my past was being revealed.

Pretty petite girls played flute or the clarinet. The cool kids played sax, or trumpet or the ultimate cool; drums. The jokers played trombone. Who takes a trombone, or a trombone player, seriously? We called ourselves the Boners, for heaven’s sake.

(There. You have it. The nickname AND the instrument.)

I had come so far but my past of being an awkward, six foot tall teenage trombonist with an 80’s perm and braces was coming back to taunt me.

I tried putting my colleague off but she persuaded me to come to just one practice, one.

That’s how I found myself one evening walking behind her and her boyfriend through the quiet street of their Toulouse neighborhood with bottles rattling in my bag. They were carrying a flute, sax and clarinet between them, I was carrying the stash. A sophisticated roadie in a Max Mara coat and high heels.

Well, the first thing I saw when I walked into the room were the steel drums…. Then the bongos (BONGOS!) And that is when I turned to see a guy tuning his banjo. How could I not join a steel drum band … with a banjo???

Before tuning their instruments, they all poured their gin and other smooth refreshments to have close at hand. This was definitely NOT Mr. Polce’s 10th grade band practice.

My colleague introduced me to everyone as the potential brass. “Ohhhh, trombone” they all said with a gleam in their eyes… For the first time in my life it was said with admiration, almost. They had wind, and string, and percussion… they even had three back up singers … but no brass. So the stakes were high to get me to join.

They finally gathered in a circle around mics and began to play. Oh, was it good. Eclectic, and good. Brazilian Songs, French songs, Spanish songs… Zydaco to old fashioned American rock and roll. At one point when the clarinet had his solo, everyone danced a joyous, infectious gin-induced dance.

During one particular song they all hummed the trombone part, taking obvious turns to try and catch my eye. I was maintaining my poker face but already projecting myself dancing wildly with my trombone in my hands casting off those hard earned years of sophistication.

But I was keeping one last dark secret close to my chest: I kind of sucked as a trombone player.

I haplessly smiled at them in their sweet attempts to entice me to join, knowing they might come to regret this fated evening.

When rehearsal was over, like in an overenthusiastic church, they all made a point of stopping and welcoming me again. I am sure I heard a happy sigh of “brass” as one of them was packing up his instrument.

I texted my colleague the next day “thanks again for last night…very, very tempting.” She wrote back immediately, “glad to hear it 🙂 go find a trombone!”

Now where was I ever going to find a trombone in the Southwest of France?